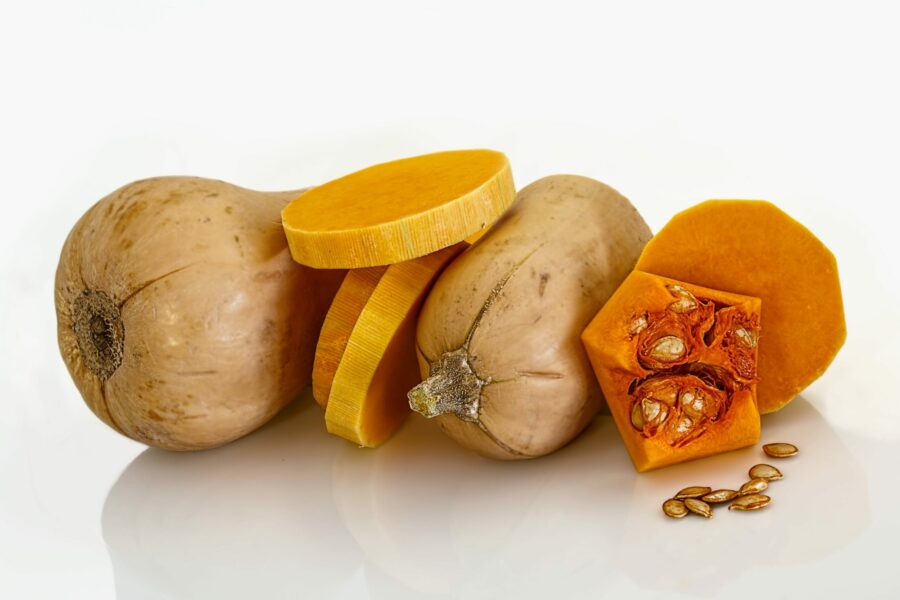 This week, a guest post via box scheme customer Louise Skinner, who describes herself as a passionate home cook, avid celebrator of vegetables and an aspiring vegan. Follow her on Instagram to see what she’s cooking up with her veg bag contents…

Harvested in autumn from the soil,
Roast it with sage and olive oil,
Preparing it takes a while,
But it’s worth it; it’s so versatile.

Goes in a risotto,
A curry,
A salad,
Tastes so sweet,
Like a heartfelt ballad.

Soft and orange and always pleasing,
It’s my favourite of the colder seasons.

Can be seen as a bit posh,
But it’s not pricey, the brilliant butternut squash.

“Over the last couple of years I’ve become much more conscious of my carbon footprint, especially when buying produce from the supermarket. I’d gotten into the habit of buying the same fruit and vegetables week in, week out, often hailing from further afield than the green of England, like avocados, jackfruit, bell peppers and sweet potatoes. My meal prep had become repetitive and uninspiring and as someone who loves to cook, I realised I needed to change things up.

“I tried a couple of veg box schemes, but I found them unsustainably pricey, until I discovered OrganicLea. I love that OrganicLea is a local community of fruit and veg growers who grow produce on my doorstep in the Lea Valley in northeast London. The scheme is so flexible, with different pricing and produce options depending on your tastes and budget. I’ve been receiving a weekly ‘standard veg bag’ since the spring, which includes potatoes every week, along with six other seasonal veggies. Every Monday morning OrganicLea post up on their website what’s in the bags this week and I always look forward to reading, so I can start thinking about what meals I’m going to cook when I pick my bag up on a Wednesday.

“Since I’ve joined the scheme I’ve broadened my culinary horizons, preparing and cooking new veggies for the first time, including fennel, rainbow chard, globe artichokes, kohlrabi and sorrel. It’s so satisfying to eat with the seasons and it’s helped me appreciate the benefits of buying organic produce. Around the same time as starting the veg bag scheme, my sister-in-law bought me Rukmini Iyer’s book, The Green Roasting Tin, and it’s without a doubt the most accessible and inspiring cookbook I’ve read in a long time, and I buy a lot of cookbooks! It’s made up solely of vegan and vegetarian recipes, all cooked in the oven in one tin. It’s a revelation and I can’t stop singing its praises to all my fellow foodie friends and family.

“Sticking with the subject of my poem, the autumnal hero ingredient, butternut squash, I’d recommend giving Rukmini’s Crispy gnocchi with mushrooms, squash and sage a go. I’m usually unimpressed when I see gnocchi on a menu, but trust me, when it’s baked in the oven, cooked alongside sweet squash, earthy sage leaves and meaty chestnut mushrooms, topped with a garlicky basil-based green dressing, it’s so moreish.”