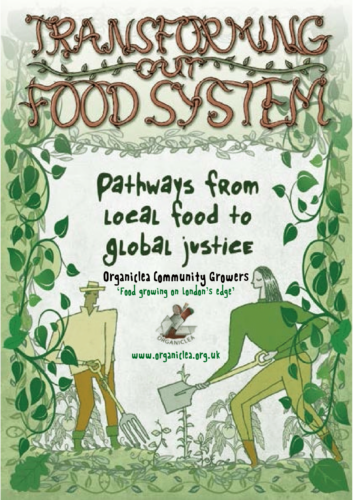 Seedlings From The Smoke 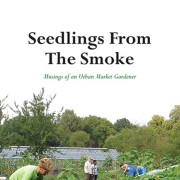 In 2009 OrganicLea took on Hawkwood Nursery, glasshouses set in a 12 acre site on the edge of Epping Forest. Since then our grower Ru Litherland has recorded our experiences in a ‘grower’s blog’ which reflects on the seasons’ turning and the joys and challenges of growing. Five years on we published Seedlings From The Smoke – collecting together these ‘musings of an urban market gardener’ as a book with photographs and hand-painted illustrations by Marlene Barrett. Buy online from the Big Green Bookshop. Details of where else to purchase or how to stock the book here.

Poster identifying some of the more than 40 varieties of leaf, flower and stem in our mixed salad bag. 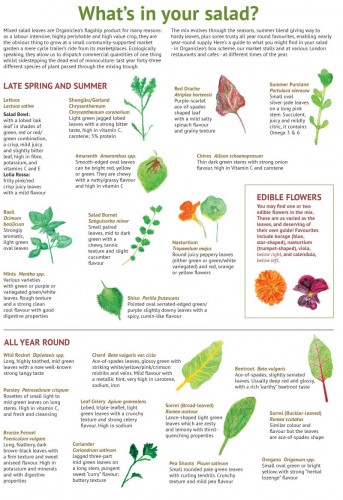 OrganicLea has been glad to contribute to an exciting new toolkit developed by City & Guilds Centre for Skills Development.

The toolkit Roots to Success is a practical guide to support volunteer-training in food growing groups. It focuses on the vocational outcomes of volunteering and how they can best be supported. It has been designed for those involved in the recruitment, management, training and progression of volunteers in food growing projects. It also offers an outline of good practice in this context, which should be of interest to trainers in other fields who manage volunteers and/or vocational learning.

A pamphlet mapping the Lea Valley’s food growing heritage. Pieces of the past, present and future.

Where Next for the Community Food Movement?

In this article aimed at those active or interested in “community food projects”, OrganicLea member Ru Litherland attempts to “reflect, analyse, even discuss, where we are, where we want to get to, how we might set off to get there, and who’s bringing the sandwiches.” The views expressed are those of the author and do not necessarily represent the aims and objectives of OrganicLea.

Hawkwood Plant and People Nursery: A journey in permaculture design (2009)

Selling Allotment Surplus: Is it legal? Is it right?

A report exploring the ups and downs of selling surplus food grown on allotment sites. (2007)

Fruits of the Forest

A report on the desirabilities, possibilities and practicalities of a Waltham Forest Local Food Scheme. (2003)

The team behind POWER made a wonderful film about OrganicLea!

A film made to promote the volunteering and training opportunities at OrganicLea.

In summer 2018 we were grateful to receive a 2-year grant from the Heritage Lottery for our Bee Wild programme. This enabled us to increase our ambition to support wild pollinators and honeybees at Hawkwood and beyond.

Two of our dedicated veg pack volunteers made a beautiful little film about OrganicLea life, and our mission to build a Woodland Classroom.

We were proud to be part of the Co-operatives UK film to celebrate co-ops, made by Blake House Filmmakers Cooperative.

A film to celebrate co-ops. "Not through competition but co-operation of each, the people's strength." Watch. Enjoy. Share. #coopdifference pic.twitter.com/UvLzDhwWGN

A video showing the work OrganicLea does through its local box scheme in Waltham Forest.

The Media Trust made a film about OrganicLea, in association with the City Bridge Trust, the City of London Corporation’s charity, which funds some of OrganicLea’s volunteering and training work.

Sustain’s video about OrganicLea’s work in growing and distributing food and encouraging others to do the same.

OrganicLea featured in a film made by Local Food as part of research to show how Local Food projects are building community capacity.