OrganicLea began in 2001, with the idea that more food can and should be grown locally, in London – and that it’s better to work with others than alone. Agreement was given for the project to take on an acre of once-derelict allotment land situated on the edge of Epping Forest in the river Lea’s valley.

Over the next year or two bramble was cleared, raised beds built and a forest garden planted with apple trees, worcesterberries and blackcurrant bushes. Structures created included a pond, a willow dome and a compost toilet (built into a honeysuckle bush). Annual and perennial vegetables were planted using organic and permaculture principles, working with nature, not against it, to grow food in a sustainable way.

At the allotment site volunteers could come and share in a day’s work and take a share of the harvest. Some of the surplus produce was sold on occasional market stalls and through North Leyton Surestart. Training courses gave other growers a chance to increase their organic growing knowledge and skills. Social events and food celebrations also marked the seasons’ turn. While the allotment site remained at the heart of OrganicLea for many years, there was clearly scope for developing something more than just our small harvest contribution. A stronger local food economy – where production and distribution remain within a small geographical area – would bring benefits in social, environmental, health, economic and cultural spheres. The notion of a local food scheme which would facilitate the production and distribution of local food within the borough was born and in 2003 we published a report exploring the desirability and possibility of creating such a scheme in Waltham Forest.

This idea and the burgeoning local activity, enthusiasm and interest in food issues gradually coalesced into a proposal for a ‘local food hub’: a place where local people can get quality local organic produce, find out about food issues and develop their own food growing skills.

The Hornbeam Centre provided a physical base for this hub: a weekly market stall was set up on its street corner from September 2006, supplied by small-scale organic farmers from East Anglia and their European partners. With a grant from the Big Lottery’s Making Local Food Work programme, the Centre was refurbished in 2008, and food hub activity was increased to include a weekly box scheme, support for the Hornbeam Café, and support for local gardeners and allotment holders to sell their surplus to these outlets through the Cropshare scheme. And of course events and workshops to share skills and celebrate local food also continued. 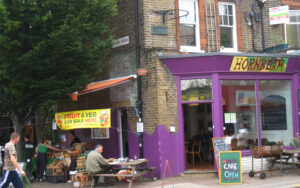 In 2007 Waltham Forest Council closed its plant nursery, sited just round the corner from OrganicLea’s allotment site, providing the tantalising possibility of significant space outdoors and under glass to increase our own local production and develop a community plant nursery, offering opportunities for all to get involved. The next two years involved lease negotiations, funding applications, and developing permaculture designs for the land, the social elements of the project and the co-op’s own organisational structure. In 2009 the Hawkwood steering group planted the first seedlings in the glasshouses, already supplying a significant harvest of salad, tomatoes, chillis and squash to the market stall and box scheme at the Hornbeam, as well as a wide range of plant seedlings to help other community growing projects and individuals who don’t have access to protected growing space. In early 2010 a ten year lease for the site was signed, and with Local Food funding in place until 2013, the Hawkwood Nursery work could shift to a new phase of major indoor and outdoor vegetable and plant production, as well as orchard and vineyard development for future fruit harvests. The site’s work was planned to include regular volunteering opportunities for those with or without previous growing experience, as well as both formal and informal training and skillsharing workshops involving practical work on the site. OrganicLea finds support from being part of a wide network of like-minded growers, and from its early days has always tried to support others to develop their growing skills, recognising the social, economic, health, environmental and community benefits achieved when people grow food in the spaces around them. As well as offering training and providing seedlings and resources like compost, this support takes the form of specific tailored support to local community groups and organisations that want to start or develop their own food growing projects. The Common Sense Growers initiative, begun in 2007, aims to bring the benefits of food growing to as wide a range of people as possible, including excluded or vulnerable groups, providing support which ranges from project planning and design to regular practical training sessions with users.

The original and continuing inspiration for OrganicLea is the rich food growing heritage of the Lea Valley, which was once known as the bread basket of London. From the Saxon settlers of the sixth century through to Italian glasshouse growers in the 1950s, newcomers came to grow food on the fertile soil by the river, both for local needs and for transportation on the river Lea to markets in neighbouring areas and down to the Thames.

The Lea Valley puzzle maps this food growing history and captures the experience of those still actively growing food in the area in gardens, balconies, allotments and community growing sites. A new generation of organic growers can be custodians of the valley’s food culture and heritage.