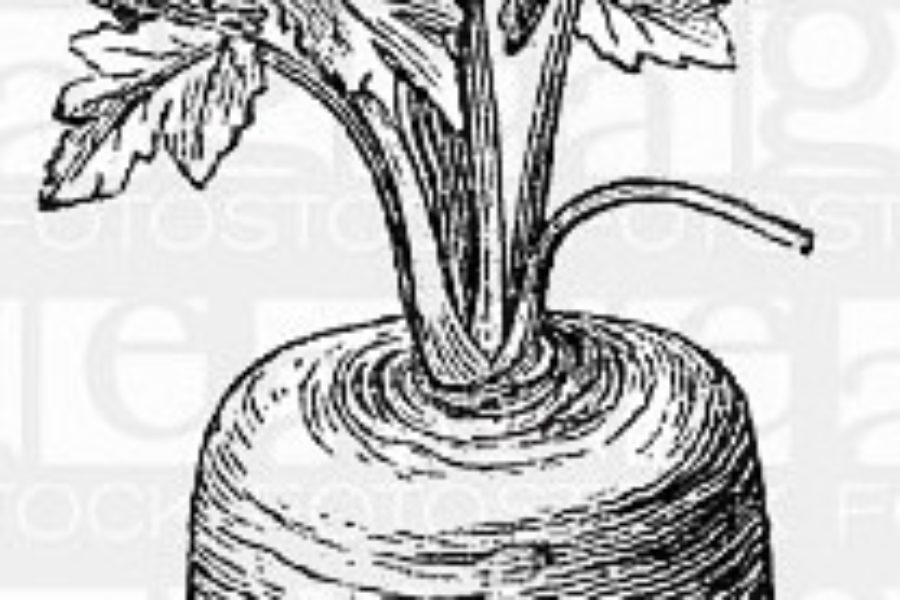 Earthy and sweet with gently distinct flavours of parsley, nutmeg and pine and a soft,

Pastinaca sativa is from the umbellifer family (having umbrella-shaped flower heads, like fennel, parsley, carrots cumin etc), is native to Eurasia and grows wild all over South-East England, especially on chalky/limestone wasteland. If you spot its yellow flowers, mark it and you can dig up the roots once the foliage has died back and the root has softened in the frost. Parsnips can be domesticated within a decade by simply moving wild roots to richer soil and selecting seeds from the larger examples.

Parnsips accumulate more starch than carrots and convert it to sugars when exposed to cold temperatures, which is why winter roots are sweeter than autumn roots. The parsnip is richer in vitamins and minerals than the carrot, being particularly rich in potassium. They were known to Greeks and Romans, though the Romans didn’t seem to distinguish them from carrots. It was an important staple until the introduction of the potato. The version we know today was developed in the Middle Ages. Before sugar became cheap they were used to make cakes and jams in Britain. During WW2 they were eaten as mock bananas. Try roasting them with a bit of rum, brown sugar and clove.

Parsnip and primrose pie: boil and drain about 1.5 kg parsnips and press them through a sieve. To about a pint of this add a tablespoon of honey, a couple of pinches of nutmeg and ginger. Beat in the rind and juice of 2 lemons and one egg yolk. Line a flan tin with thin pastry and fill with the mixture. Make a lattice with any cut trimmings and bake until golden brown (start with half hour at 190’C). If using egg, beat the white, sweeten it and pile around the edge of the flan. Return to the cooling oven to set. Serve cold, garnished with primroses. A very pretty country dish.

Parsnip Chips: scrub parsnips (peel if you have time and want a more absorbent and therefore crispy skin) and chop into any size you like. Bring to the boil and boil 2 – 5 mins depending on size. Drain well, then roast in a hot oven in oil for 30 mins, shaking pan occasionally to move them around. They don’t want to be tightly packed. It’ll mean they sweat, instead of crisping.

Parsnip and parsely or curried parsnip soup for 4: gently fry a large chopped onion ’til golden-brown and add either a similar volume of finely chopped parsley stalks or a spoonful of curry powder/or your own combination of favoured curry spices (ground). After a minute add 3-4 scrubbed, chopped parsnips and then stock or water to cover and salt and pepper. Simmer ’til tender. Variations to the parsley version: stir in a couple of spoonfuls of chopped or crumbled stilton or cream just before serving.

Parnsip patties: boil, drain and mash parsnips with a little flour, a pinch of nutmeg, a lump of butter, pepper and salt and form into small, flat cakes an inch high. Leave to stand and cool, so they hold together better. When cool (optional: dip these into beaten egg and then breadcrumbs and) fry in oil, lard or dripping, til brown. Good with harissa (on the side or mixed in) or parmesan (grated/shaved and mixed in or added on top) and some crunchy bitterish salad leaves.

Parsnip wine (one of the oldest English wines) – requires a wine cask. Scrub, chop and boil 2kg parsnips gently in 4l for about 25 minutes (with a little whole spice if liked), Strain and add 1.5kg demerara sugar to the liquid. When the liquid is lukewarm, float on it a slice of toast spread with 1 tbsp fresh yeast. Let it ferment 36 hours (time depends on weather). Then turn it into a cask which it should fill. As soon as fermentation ceases, bung securely and leave for 6 months unmoved. Transfer to bottles, during a frost. Store 12 months before using. Improves up to 10 years.