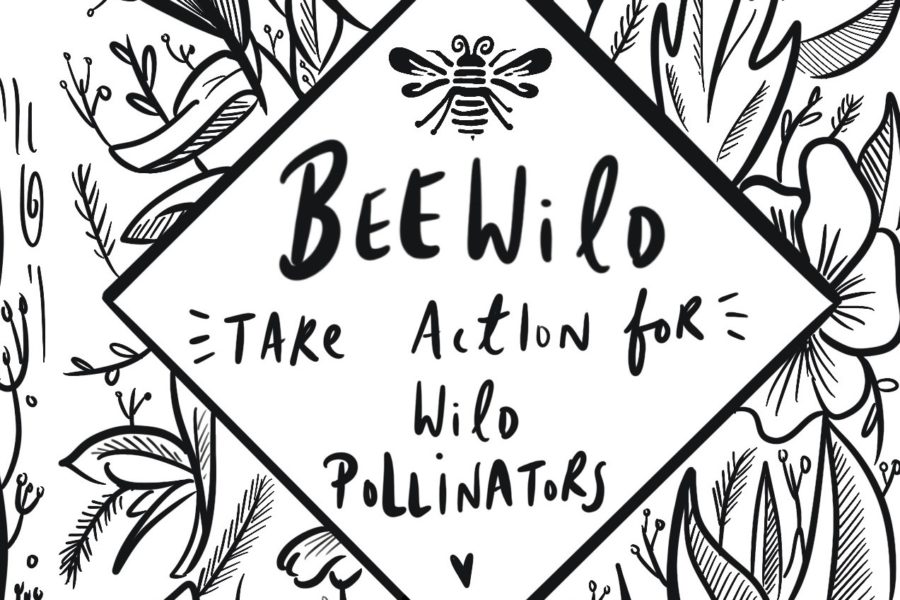 Our current session of Bee Wild activity, funded by The National Lottery Heritage Fund, started in autumn of 2018. It’s helped us strengthen, diversify and raise awareness around the flora and fauna of our site and the important role pollinators play in our ecosystem. It’s also enabled us to take our learning outide of Hawkwood, to share action ideas and practical advice with other people.

At Hawkwood we’ve built a pollinator focus into some of our usual horticultural tasks, and set up a specific group of volunteers who have worked over six sessions to survey flora and poll the numbers of insects of site, observe our honeybee hives, and sow and plant more plants to support and attract insects. They have also learned how to create new habitats on site like bumble bee homes and solitary bee homes.

Another group of volunteers was formed who had a specific interest in learning more about sustainable beekeeping and managing the honeybee hives at Hawkwood this year, led by sustainable beekeeper Sean Hearn who set up our hives in 2000.

Here’s some sharings of what has happened across the year:

September 2018
The end of the summer meant that it was time to give the Old Kitchen Garden area of the site its two year gap in its crop rotation, growing green manures to replenish the soil ahead of restarting its growing cycle. Our pollinator volunteer group sowed our regular green manure seed mix, but added in extra wildflower seeds in the hope of creating an area that was even more pollinator friendly.

At our September open day, we held Bee Wild family drop-in activities, like making bug hotels and learning about bees, hoverflies and other pollinators and what you can do to attract them into the garden (every monthly open day since then has included drop-in Bee Wild family crafting activities).

The open day also included a talk by Sean on how we carry out natural beekeeping practices at Hawkwood, the current bee crisis and what we can do about it.

February 2019
Our open day included a practical Fruit Care for Pollinators workshop on the basic principles of pruning fruit bushes and trees for the benefit of both pollinator species and humans alike.

March 2019
Illustrator and educator Merlin Strangeway led an workshop on bees for children at our monthly open day. The children’s drawings formed the basis for the Bee Wild logo we use on our pollinator trail that was launched later in the spring.

April 2019
Our pollinator volunteer group regrouped to sow a wildflower meadow near the orchard at Hawkwood. The site was picked as the fruit trees there depend on insect pollination, plus it’s very close to our apiary. In April we also sowed wildflowers on the lower part of our Springfield.

At the monthly open day we launched our pollinator trail with map including the children’s designs from March, and held a repeat of Sean’s popular bee talk.

April also saw the volunteer bee team gather for the first time, with a view to learning more about the hives at Hawkwood across this year’s beekeeping season. We kicked off with a day of foundation information in the classroom that included honeybee biology, hive design, observation skills and swarm training.

Some key honeybee facts we learned:

At our April open day, we held a Bee Wild themed site tour, following our newly launched pollinator trail to show what we are doing to make Hawkwood a more pollinator-friendly habitat.

This was followed by a talk on bees in crisis by Sean Hearn, who shared some information on how we manage our honeybee hives sustainably at Hawkwood.

Towards the end of April, members of the volunteer bee group started going to the apiary to observe the hives. We note the weather, temperature, any observations on population (what sort of bees are entering and leaving the hives – are they mostly drones, or workers?), how much pollen is being brought into the hive and what colours, and how much comb the hive has build since our last check. We do all of this without opening the hives and disturbing the bees.

May 1st was an exciting day for our volunteer pollinator and bee groups, as the pollinator group witnessed a swarm in a tree very close to our apiary while walking through the site. Several of us grouped to watch the swarm – a first for many of us. It was noted how calm and compact the bees seemed in their cluster, roughly the size of a football on a tree branch.

This swarming period is a time for ‘scout’ worker bees to look for potential new homes within a few hundred feet of the swarm. We decided to intervene and move the swarm into one of our nearby empty hives. Sean climbed a ladder and cut the branch from the tree and got the bees into their new home swiftly and safely.

Further observations of the hives in May showed the new family to be settling in well to their hive, busily building comb.

June 2019
June kicked off with a weekend course open to the public but also attended by several members of Hawkwood’s volunteer bee team. It served as a refresher for some of us on the theory of sustainable beekeeping and honeybee biology, but also allowed for some deeper discussion. We learned some facts about solitary bee species and how they reproduce and feed their young. We also learned about common bee diseases and parasites, and how sustainable beekeepers can best protect their hives.

We learned that it’s important for gardens and other horticultural sites like ours to have plants that flower in winter, as on warm winter days bees may be able to leave the hive to forage for much-needed nectar.

It’s important to note that the beekeeping we’ve been learning about this year is specific to our region and climate in the UK, and there are different practices and hive designs used in warmer climates. We learned about harvesting honey – it usually happens in late August on our site, but if it doesn’t look like the bees will have a surplus of honey, we don’t harvest any. You can also take honey from a hive that’s produced plenty of honey and feed it to an underproductive hive to help them survive the winter if needed.

We also learned that bees are most vulnerable in winter, and not just from disease or parasites, but from woodpeckers and mice!

Later in June, Sean showed us how to use tools and sustainably sourced materials to build new hive boxes.

July 2019
July brought the Walthamstow Garden Party, where we had a stall selling some of our produce and with info about our work, but also had a Bee Wild pollinator plant giveaway, a seed bomb making workshop, and a talk about bee-friendly gardening by our grower Gary.

Our volunteer pollinator group took a walk around the Hawkwood site later in July, following our pollinator trail. It was fantastic to see so many wild flowers in all the areas we sowed and planted earlier in the year, like the Old Kitchen Garden, Springfield and near the orchard. It was easy to see how popular they all were with a range of pollinator insects – in just a few minutes’ observation we saw plenty of moths, hoverflies, bumblebees and honeybees.

As we approach the end of our first year of Bee Wild activity, we asked two of the pollinator volunteer group for their thoughts on some of the sessions they’ve taken part in.

Goli said: ‘I’ve never experienced a level of calmness like when we’re observing bees and being in that space. So many children learn to be scared of bees, but it would be great to see them being able to have experiences like this.’

Kate said: ‘It’s opened my eyes to the value of pollinators generally and how essential they are. It’s been so exciting – having the opportunity to see the site and see the decisions and planning that’s gone in to it – it looks like a natural environment but is consciously managed to encourage pollinators. It really makes you focus, look and observe, and be mindful in a different way.’

Orla, one of our volunteer bee team, said the following: ‘I’ve been blown away by the beauty and complexity of the hive families in our apiary. Working with and learning about honeybees over this season has opened my eyes to the wider realm of our native wild pollinators and how the simple interventions we make, like interplanting wild flowers with our green manures, really help to increase numbers and diversity of pollinators across OrganicLea’s growing site.’

‘It has also brought into stark relief the declining numbers of pollinators in other green spaces around London and has made me determined to have a messy, meadow-y, pollinator friendly garden and allotment.’