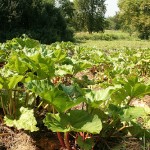 Rhubarb is a vegetable native to Siberia. The leaves are poisonous due to their very high levels of corrosive oxalates; it’s the stalks that we eat. They are intensely sour. Counterracted with sufficient sugar, their fascinating flavour emerges: cooking apples, tomato plants and strawberries. It became popular in early 19th Century England as the first fruit-like produce to appear in early Spring. It is used as a cathartic in Chinese medicine. In Iran and Afghanistan it is used as a vegetable in stews, with spinach. And in Poland, with potatoes. The name comes from a combination of the Greek rha (rhubarb and the Volga river) and barbarum (foreign). Forcing stalk growth to produce pinker, sweeter, tenderer stalks faster, and availability of cheaper sugar resulted in a rhubarb boom which peaked between the wars. Different varieties vary in colour between green and red. Acidity is notably due to oxalic acid which is present in quantities double or triple levels in spinach. The colour of red stalks is best preserved by minimising both the cooking time and the quantity of added liquid which dilutes the pigments.

Obviously there is rhubarb crumble and rhubarb and custard but also:

Thinly slice cucumber and rhubarb, toss with a little salt and and leave to stand. Mix in rocket, lemon juice and a little mint.Serve with  generously oiled roast root veg.

Cook short lengths in a pan gently, with a couple spoonfuls water only, sugar (about ¼ the weight of rhubarb, depending on taste) and sparing flavourings – combinations or singles from the list above (or in the oven without water, and with the flavourings slightly crushed) serve with custard, cream or almond cream (below)

Marinate raw sliced rhubarb with rosemary and honey for a couple of days. Mix with sliced dried apricots. Serve with almond cream, made by blending 1 tbsp skinned whole almonds per person to a fine powder-paste, then dripping in a little water and blending until the desired consistency is achieved.

With thanks to Ruth at Hornbeam Cafe