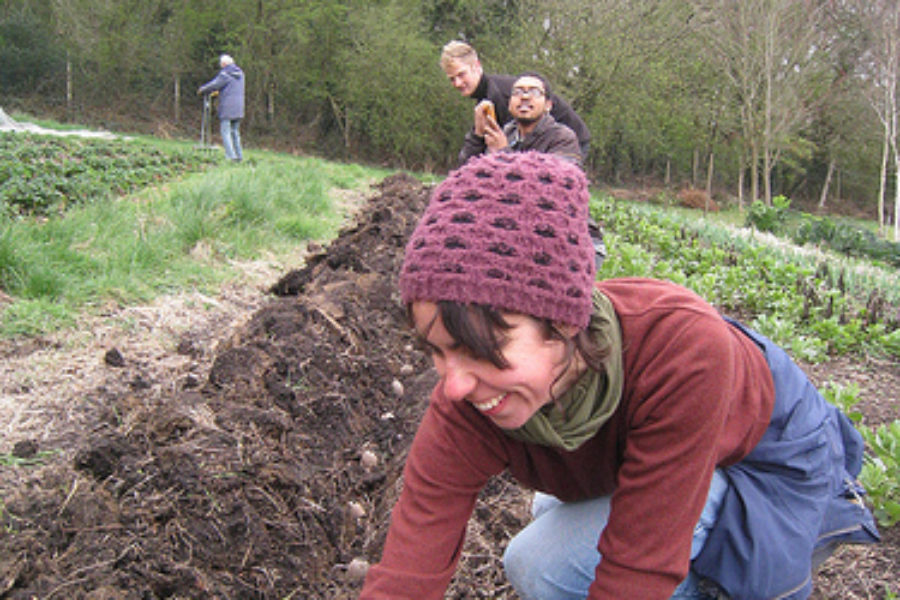 On Thursday – chiming with the season’s timing – the Hawkwood site planted seed-potatoes along the curve of the entrance field. Ru, Mary, Jairo and Jonny prepared a trench then cast a neat row of ‘chitted’ seed potatoes: ‘Red Duke of York’ variety.. an early-new potato that we hope to be digging-up and distributing in June! Over 200 seed potatoes went underground which we hope will yield between 10-20 new potatoes each – that’s some fine sack fulls.

… as this team worked preparing the trench and planting potatoes, Clare, Jo, Gertraud and Ed weeded and prepared a lower bed for ‘rainbow’ carrots which will be sown after good rain fall.. even though we know carrots don’t like London soil, we’re giving this a sowing. Plenty of leaf mould was added to balance up our London clay soil.

With no planning on our part, we were reminded of age-old lore and peasant tale that guides us to plant early potatoes on Good Friday. For those gardeners working in the grounds of wealthy estates and residencies, Good Friday was a holiday and that meant being able to get work done on the home-garden and potatoes planted for the family crop and the season to come.

Timely reminders and our first chitted potatoes are underground.