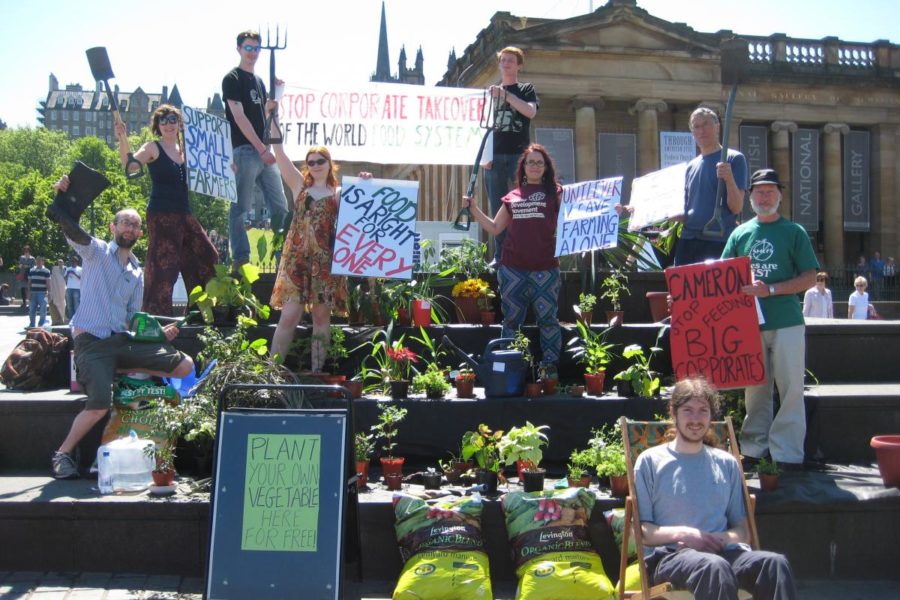 As David Cameron addressed his ‘nutrition for growth summit’ inside the Unilever Building in Blackfriars on Saturday, Organiclea  joined with others to create a pop-up community garden outside, to demonstrate that increasing corporate control of the food system is not the pathway to ending hunger. Saturday’s meeting at the Unilever building was to expand the G8’s ‘new alliance for food security and nutrition.’ An initiative launched in 2012 where the G8 nations, African partner countries and private sector partners aim to help lift 50 million people in sub-Saharan Africa out of poverty in the next 10 years by supporting agricultural development. The UK government alone has pledged £395m of taxpayers’ money to the scheme.

However, scratch the surface of this support, and it’s easy to see this neo-liberal solution will result in increased inequality for average people and reduce the rights of small-scale farmers, as well as undermine sustainable farming. This new alliance paths the way for large multinational companies, like Monsanto, Dupont and Syngenta and their vested interests to ‘develop’ African agriculture though technical and market-based solutions. These companies focus on large-scale farming solutions which regularly encourage ‘land grabs’, monocultures, heavy water use and the use of genetically modified seeds. Already, networks of smallholder farmers and environmentalists in Africa have named the alliance “a new wave of colonialism”, designed to secure profits and royalty flows out of Africa.

Activists from the UK Food Sovereignty movement, War on Want, Community Food Growers Network and World Development Movement stood in solidarity with African civil society in rejecting the ‘New Alliance’ on Saturday; calling on the Alliance to recognise that about 70% of the world, predominately in rural populations, is fed by small-scale farmers. Maybe next time Cameron can actually involve them in the discussion, not just a select political and business elite?

This week is the annual global conference of La Via Campesina (global alliance of over 150 organisations who represent over 2 million small scale farmers) in Jakarta. Organiclea is very proud that our colleague Adam is there representing the Land Workers Alliance, the UK member organisation of La Via Campesina of which Organiclea is member. Attending are 500 delegates from 80 countries discussing issues that small-scale producers will be facing in the coming years, such as the Plant Reproductive Materials law in the EU and the G8’s new alliance on food security and nutrition. Full update next week!