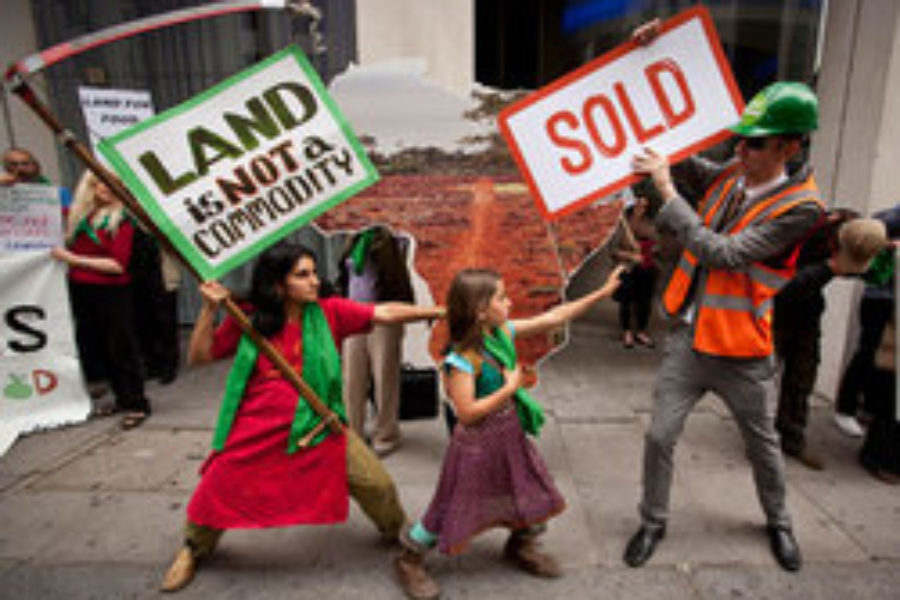 Following the busiest 12 months in the history of neo-colonial land grabs, Organiclea joined a group of food producers, NGOs and civil society organisations in central London to stand in solidarity with farmers who have lost their lands.

On the 26 June we took part in a protest outside the London round of an international land investment summit. The protest marked the launch of a statement signed by over 60 environmental, development and farming groups calling for pension funds and other financial institutions to stop land grabbing.

Nyikaw Ochalla, a representative of the Anywaa survival organisation who fight to protect the land and livelihoods of the Anuak people from land grabs of foreign companies said “Africa, Asia and Latin America are seeing an acceleration of land grabbing at a rate not seen since colonial times…Land is the lifeline of hunter-gatherers, pastoralists, fishing and farming communities in the Ethiopian lands targeted by land grabbing policy.  It is a myth that our lands are ‘wastelands’, only suitable for commercial agricultural development.”

Meanwhile, not so very far away, the UN Food and Agriculture Organisation (FAO) has taken the first steps towards regulating takeovers of agricultural land by foreign governments and corporations.

The Voluntary Guidelines on the Responsible Governance of Tenure of Land, Fisheries and Forests were endorsed by the FAO’s Committee on World Food Security in May, and provide a template for both tenancy and sale agreements with foreign investors.

Speaking during the negotiations Jean Ziegler, former UN special rapporteur on the right to food concluded “Land grabbing is clearly a gross violation of the rights of peasants. Most of these land grabs are not even for food production but for agrofuels, which are destroying our land, society, environment and our food sovereignty. We have to forbid land grabbing, if we want to protect our food system.”

We couldn’t agree more, lets hope they can live up the hype.