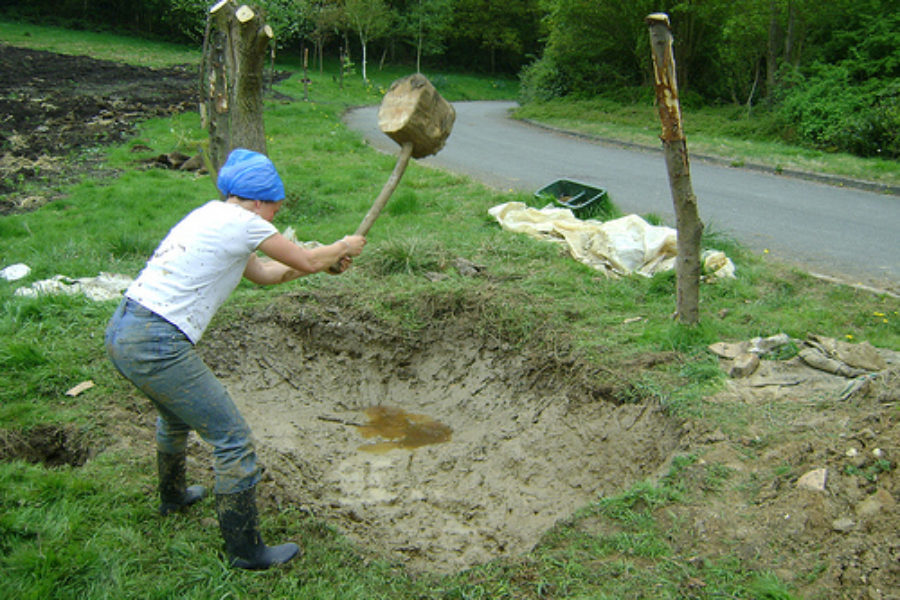 Nicole ‘puddling’ the pond …or so she claims, personally I think she just wanted an excuse to use that massive homemade hammer.

It was one of our weekly volunteer sessions this slightly overcast thursday afternoon. Quite a few photogenic things going on today so I thought it might be nice to get some of them online…

Ru in the field getting stuck into the plough – which he claims is ten housepower; I would rather have been using ten horses myself but I guess this is easier to store.

Holly is potting on things in the glasshouse, a nice warm, calm and sensible job if ever there was one.

Dominique and Huf are putting the ceiling on the straw bale classroom. I’d quite like to join in with this soon – it looks like a good excuse to use shiny tools.

A big work team of volunteers are making the tomato beds which seems to involve hanging lots of string from the ceiling ready for them to grow up.

Sean was mostly in the office finishing a ‘fun ding’ application, whatever that is and I spent the day moving heavy things about with a wheelbarrow which was just lovely.